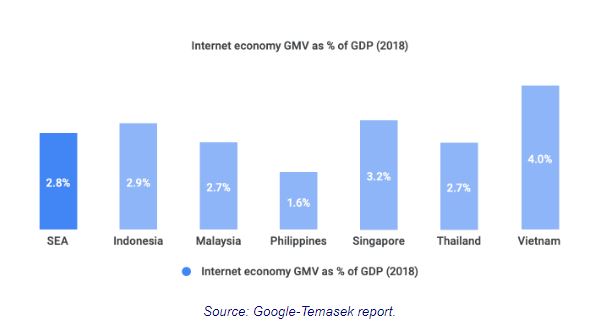 The Hanoitimes – The country’s internet economy is projected to reach US$33 billion by 2025, at a compounded annual growth rate (CAGR) of 25% in 2015 – 2025.
Vietnam’s internet economy has made a turnover of US$9 billion in gross merchandise value (GMV) in 2018 across online travel, e-commerce, online media and ride hailing, which is akin to “a dragon being unleashed”, described the latest report jointly launched by Google and Singapore’s state investment firm Temasek.

With e-commerce growth almost doubling in 2018 from a year earlier, and as online advertising and gaming growing at more than 50% year on year, the Vietnamese internet economy is booming. Amidst one of the lowest penetrations of online travel bookings in the region, the online travel market has also huge headroom for growth, according to the report.

Buoyed by a massive internet user base and increasing adoption, the Southeast Asian internet economy is forecast to gross over US$240 billion in GMV by 2025, nearly US$40 billion higher than previous estimates.

The report noted that the region’s internet economy will reach US$72 billion in GMV in 2018 across the four categories of online travel, e-commerce, online media and ride-hailing.

Growing at 37% from a year earlier, the region’s Internet economy has accelerated beyond the 32% CAGR between 2015 and 2018, therefore hitting an inflection point.

Google and Temasek, in their 2016 version of the regional Internet economy report, had predicted the digital market would reach as high as US$200 billion by 2025. The report had also estimated that in order to achieve that goal, the region would need investments of approximately US$40-50 billion over a decade. The uptick in the projection was caused by significant business size and growth of new markets such as online vacation rentals, music and video-on-demand subscription, and online food delivery.

According to the report, more than 350 million people access Internet on a regular basis across Indonesia, Malaysia, Philippines, Singapore, Thailand, and Vietnam in June 2018 — 90 million more than the same period in 2015. Also, with more than 90% of Southeast Asians connecting to the internet primarily through their smartphones, this is one of the biggest mobile-first internet regions globally.

The internet economy of Southeast Asia has experienced a dramatic surge in fundraising over the last four years. Companies in the region began to seriously attract the attention of venture capital, private equity, and corporate investors in 2015, when funds raised crossed the US$1 billion mark for the first time.

After that, investments have continued to grow at an exponential pace. Internet economy companies received more than 4X that amount in 2016, when they raised US$4.7 billion, and further doubled that in 2017, when they raised US$9.4 billion. 2018 is on track to be a record year, with US$9.1 billion raised in the first half of the year, nearly as much as in all of 2017.

With the total capital raised adding up to $24 billion in less than four years, Southeast Asia is progressing ahead of schedule towards the goal of attracting $40 to $50 billion worth of investments, the estimated amount required to build the internet economy by 2025.

While Southeast Asia’s nine internet unicorns, including Bukalapak, Go-Jek, Grab, Lazada, Razer, Sea Group, Traveloka, Tokopedia and VNG, have to date received the majority of this whopping capital, attracting US$16 billion of the US$24 billion invested in the region, the most dynamic segment was that of companies valued between US$10 million and US$100 million.

As the bedrock of the internet economy, these companies have raised $1.4 billion in the first half of 2018, already eclipsing the $1.0 billion they received in all of 2017

Southeast Asian e-Commerce, Online Media, Online Travel, and Ride Hailing companies have received investments worth almost US$20 billion since 2016, or more than 80% of the total funds raised by internet economy companies, confirming the importance of these four key sectors covered in the report’s e-Conomy SEA research.