The government has decided to raise the ceiling of the public debt-to-GDP ratio from 60% to 70% which will allow further borrowing to rehabilitate the economy battered by Covid-19.

The decision was made by the State Monetary and Fiscal Policy Committee chaired by Prime Minister Prayut Chan-o-cha on Monday.

The committee is made up of representatives from the Finance Ministry, Bank of Thailand, the National Economic and Social Development Council and the Budget Bureau.

Finance Minister Arkhom Termpittayapaisith said that the decision was intended to provide the government with more fiscal space should the need arise for the government to borrow more money to carry out medium-term financial policies. Mr Arkhom assured that the government still has the ability to repay debts.

“The revision of the ceiling is in line with Section 50 of the 2018 State Fiscal and Financial Discipline Act which authorised the committee to revise it every three years,” he said.

A Finance Ministry source said that the decision to raise the ceiling corresponded with the global and domestic economic situations impacted by Covid-19 as the government has increased its financial burden to rehabilitate the flagging economy.

The government issued its first emergency loan decree last year to authorise it to borrow 1 trillion baht to fund its stimulus schemes to combat the pandemic. A second decree was issued this year to allow the government to borrow an additional 500 billion baht.

The Bank of Thailand (BoT) previously urged the government to borrow an additional 1 trillion baht to address the severe economic impact of the pandemic and boost the country’s long-term growth prospects. 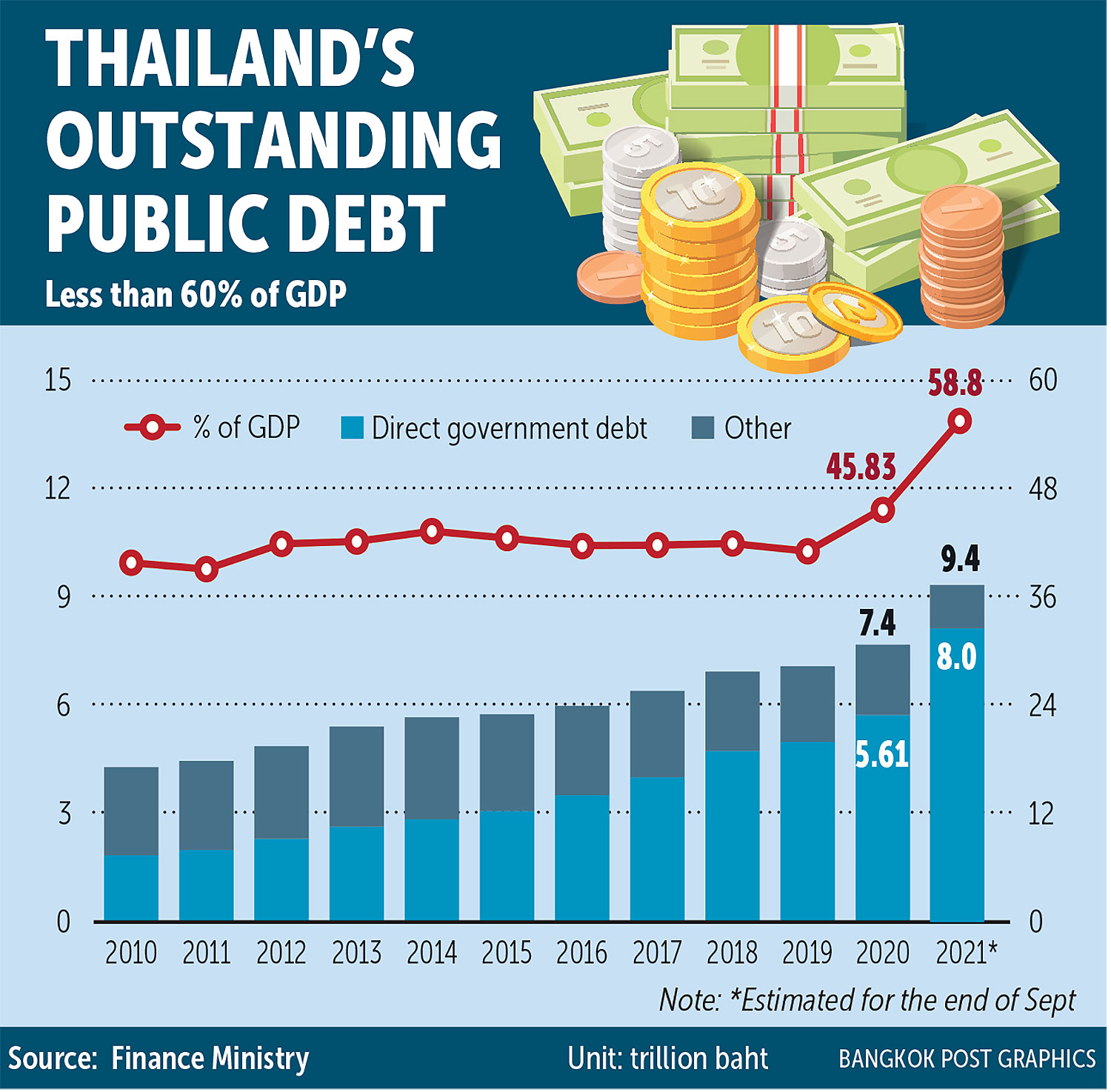 The central bank’s governor, Sethaput Suthiwartnarueput, said earlier he would consider such state borrowing to be reasonable.

Given that the economic impact of the pandemic is expected to be harder and longer than the BoT’s earlier assessments, fiscal policy should play a key role in ameliorating lockdown pain and supporting the economy, Mr Sethaput added.

As a result, the BoT sees it as reasonable for the government to borrow an additional 1 trillion baht, which will account for 7% of the country’s gross domestic product (GDP), he said. Such a move would increase the country’s public debt ratio to 70% of GDP by 2024.

If the government borrows now to support economic expansion for the next 10 years, it would be better than borrowing later, Mr Sethaput said. If the government can maintain existing fiscal stability, it would not matter if public debt peaked at 70% of GDP, the governor added.

Mr Sethaput also said the government should use additional borrowing to boost economic multipliers, such as the existing co-payment scheme, loan guarantee scheme, and other subsidy measures to provide people with relief from the hardship of the pandemic.

Another Finance ministry source also said that the revision must be presented to the cabinet for acknowledgement before it is announced in the Royal Gazette.

“If the ceiling had not been raised to 70%, investment projects carried out by state agencies and state enterprises that are awaiting loans to implement them would have been impeded,” the source said, adding that the revised ceiling is intended for medium-term fiscal policies so there is no need to borrow up to 1 trillion baht straight away because the 500-billion-baht loan decree is still adequate for short-term policies to improve the economy.

“We’re running short of fiscal space. If the ceiling hadn’t been raised, this would have had an adverse impact on several investment projects by state agencies and enterprises. The ceiling is only raised just in case, and no money has been borrowed yet,” the source said.

Sanan Angubolkul , chairman of the Thai Chamber of Commerce, previously said that raising the ceiling was necessary for the government to have enough money to revive and propel the economy.

The economy has suffered an estimated 1 trillion baht in damages caused by the pandemic since early this year, Mr Sanan said. The chamber has urged the government to expedite spending of the current loans and come up with a plan for additional borrowing to rehabilitate the economy, he said.