But export growth is forecast to ease sharply in 2022 due to the high base this year and as the economic recovery for Singapore’s key trade partners slow.

Total merchandise trade in 2021 is now expected to grow between 17 per cent and 17.5 per cent, said Enterprise Singapore (ESG) on Wednesday (Nov 24), up from 13 per cent to 14 per cent tipped in August.

It also raised its forecast for non-oil domestic exports (Nodx) to expand between 9.5 per cent and 10 per cent this year, from 7 per cent to 8 per cent in previous estimate.

For 2022, however, trade growth is expected to ease from the high base this year, said ESG. It gave a “cautiously optimistic forecast” of zero to 2 per cent growth for both total merchandise trade and Nodx.

Singapore’s key trade partners including China, the United States and Eurozone are expected to see their growth ease from 2021’s pace, though Asean and Japan are forecast to grow faster in 2022, having seen their recovery disrupted in 2021, ESG noted.

“Supply-side issues such as semiconductor shortages and port backlogs may strain supply chains and weigh on trade, though these are unlikely to have a large impact on overall global trade flows,” ESG noted.

They added that the economic reopening in the region will support trade activities and reduce supply disruptions.

For the third quarter of this year, Singapore’s total merchandise trade grew by 19.1 per cent, following the 27.3 per cent growth in the second quarter.

Non-oil trade rose by 14.6 per cent, while oil trade increased by 50 per cent, amid the higher oil prices from a year ago, ESG noted.

Oil trade had jumped by 98.4 per cent in the previous quarter.

Meanwhile, Nodx recorded an increase of 9 per cent, down from the 10.1 expansion in the second quarter.

Total services trade also increased by 7.5 per cent to reach $130 billion in the third quarter.

Breaking down Singapore’s third quarter trade performance, ESG observed that Nodx grew mainly due to non-electronics such as specialised machinery, petrochemicals and pharmaceuticals.

Exports of non-electronic products rose by 7.1 per cent over the year in the third quarter, following the 8.5 per cent increase in the second quarter.

Specialised machinery grew by 52.8 per cent, while petrochemicals rose by 43.8 per cent and pharmaceuticals by 20.4 per cent.

Meanwhile, electronics exports grew for the sixth straight quarter. They expanded 15.3 per cent in the third quarter on a year-on-year basis, extending the 15.7 per cent rise in the previous quarter.

Integrated circuits, personal computers, diodes and transistors contributed the most to the increase in electronic Nodx.

ESG noted that Nodx to the top markets as a whole grew in the third quarter, although exports to the US and the European Union 27 declined.

The biggest contributors to the Nodx growth were China, Taiwan and South Korea. 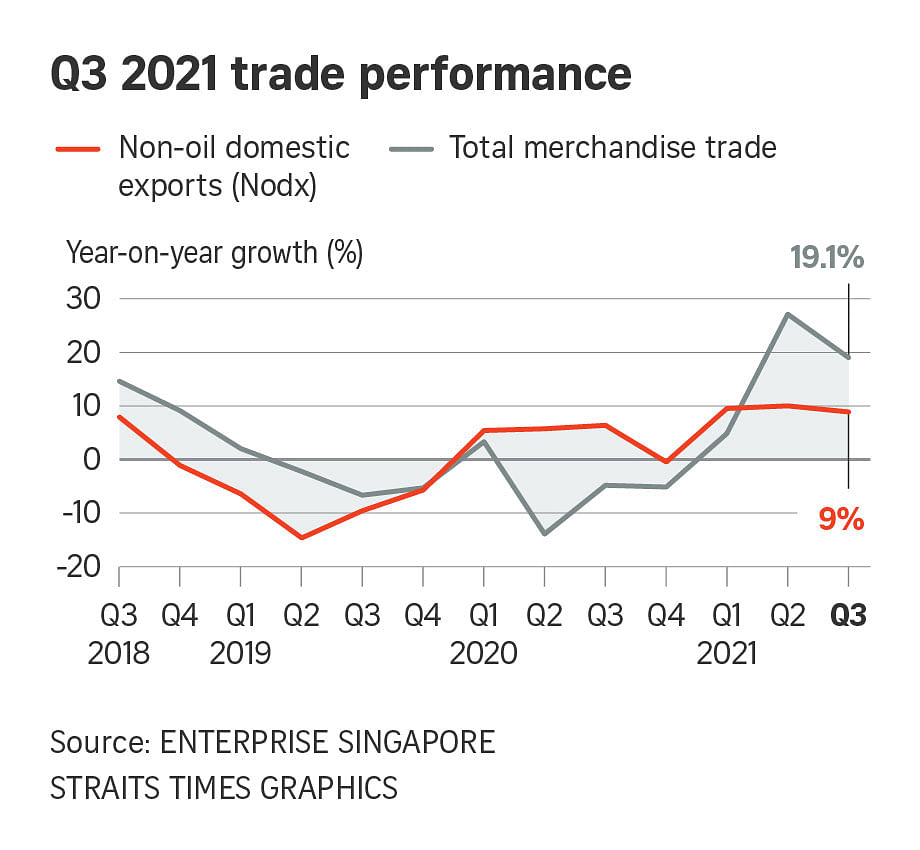 “Electronics and related specialised machinery exports had supported Nodx growth and is expected to continue amid robust global semiconductor demand, while petrochemicals Nodx grew for the third quarter straight year on year after declining amid a global downcycle in 2019 and 2020.”