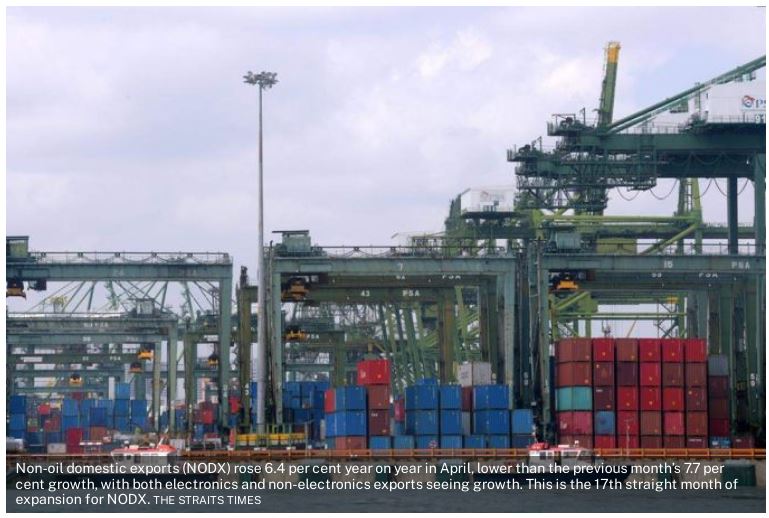 Singapore’s key exports in April eased slightly from the previous month, although shipments to the Republic’s top 10 markets rose as a whole, according to data from Enterprise Singapore (Enterprise SG) on Tuesday (May 17).

Non-oil domestic exports (NODX) rose 6.4 per cent year on year in April, close to private-sector economists’ expectations of a 6.5 per cent growth based on a Bloomberg poll.

This is also the 17th straight month of expansion for NODX, with both electronics and non-electronics exports seeing growth.

It is, however, lower than the 7.7 per cent increase in March.

On a month-on-month seasonally adjusted basis however, exports fell 3.3 per cent, following March’s 2.3 per cent decline, with lower shipments of both products.

The level of NODX reached S$16.6 billion in April after seasonal adjustment, lower than S$17.2 billion in the previous month.

Non-electronic exports rose 4.6 per cent in April, slowing from the 6.8 per cent growth in the previous month. Exports of structures of ships and boats surged a whopping 305.6 per cent, followed by measuring instruments at 18.4 per cent and specialised machinery at 6.9 per cent.

While NODX to Singapore’s top 10 markets rose on the whole, exports to China, Hong Kong and South Korea declined.

Exports to Taiwan expanded 29.9 per cent in April following a 0.6 per cent rise in March, due to a 312.3 per cent surge in the exports of parts of integrated circuits.

In second place was Malaysia, with exports rising 20.7 per cent, although this is slower than March’s 29.1 per cent growth. Exports of integrated circuits jumped 94.6 per cent.

This is followed by exports to the United States, which grew 10 per cent in April, easing from the 68.1 per cent in the previous month. Exports of miscellaneous manufactured articles surged 217.9 per cent.

Exports to China meanwhile contracted 10.6 per cent year on year in April, compared with a 4.7 per cent growth in the previous month.

“The sharp decline in NODX to China is likely attributable to the Covid-related lockdowns in key cities like Shanghai which have weighed on onshore business confidence and impacted private consumption as seen in the recent soft Chinese economic indicators like April industrial production, retail sales and the unemployment rate,” said OCBC’s Ling.

Maybank economists Chua Hak Bin and Lee Ju Ye noted that NODX growth eased to its slowest pace in 8 months, as exports to China and Hong Kong contracted due to lockdowns and supply disruptions.

Exports to Asean were a bright spot however, said the Maybank economists, with robust growth to Malaysia, Indonesia and Thailand as the reopening momentum gathered pace.

Keeping their NODX growth forecast at 4-6 per cent, the Maybank team said the outlook for global trade is clouded by emerging headwinds including the Russia-Ukraine war, China’s lockdowns and global monetary tightening.

OCBC’s Ling said exports growth is likely to “taper further” in the second quarter after a healthy 11.4 per cent in Q1, with the full impact of the headwinds still being played out.

“While we are hopeful that Singapore’s Q2 NODX growth slowdown will be temporary rather than persistent, the external demand picture has dimmed compared to the start of 2022, with market players now concerned about the risk of an outright US recession on the horizon and the EU (European Union) warning that growth could stall at 0.2 per cent this year under a severe scenario if Russian natural gas supplies are seriously disrupted,” she said.