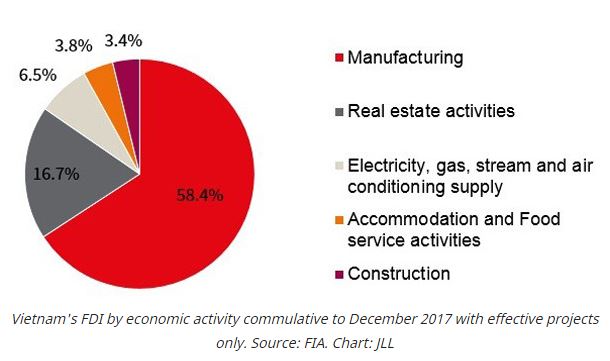 Economic and political reasons are major factors that make Vietnam a bright market.

More investors are advised to switch their investment portfolio to Vietnam, the only country in Southeast Asia expected to post positive growth in 2020 amid the global devastating impacts caused by the Covid-19 pandemic.

Economically and politically, Vietnam has participated in more global forums and engaged in different events of the region and the world.

In addition, it has signed dozens of free trade agreements (FTA) that provide the country with significant advantages in terms of trade and investment.

The latest trade agreement it signed is the Regional Comprehensive Economic Partnership (RCEP), the world’s largest trade deal that covers one third of the world’s gross domestic product (GDP).

Among the FTAs, five trade deals have been inked within ASEAN, six have been signed between ASEAN and its partners including China, South Korea, Japan, India, Australia, and New Zealand, and four other bilateral free trade deals.

In 2019, FDI to Vietnam reached US$38 billion, up 7.2% on-year, marking a decade record high. Of the total foreign capital commitment in the year, the amount to real estate accounted for 10.2%.

Regarding infrastructure, the government continues to make heavy investments into this industry. According to Asian Development Bank (ADB) projections, Vietnam outpaces every Asian country, except China, in the ratio of spending on infrastructure out of GDP.

Another reason is the shifting of locations and capital inflows from China. Indeed, China’s ongoing move towards a higher income nation and the deepening ties of Vietnam into global supply chains have acted as major factors to brighten Vietnam on the global map of investment hubs.

China’s role in the global economy is maturing as manufacturing focuses inwards and the country becomes more service-based and less dependent on exports. In addition, the trade dispute with the US is speeding up this transition, according to CBRE.

Vietnam is poised to be a key beneficiary in the rotation in China thanks to its lower labor costs and more affordable land costs, less restrictive trade barriers, straight forward access to new supply chains, improved infrastructure, and more industrial policy support, among others.

Geographic position enables Vietnam to provide more values to global multisectoral companies than major ASEAN peers including Indonesia and the Philippines thanks to convenient connectivity to all parts of the world via air, sea, road transportation. The country is home to an extensive network of national highways, world-class ports, and better equipped airports.

In Vietnam, this scenario will be no different, and will rely heavily on the favorable fundamentals of the property space.

Going forward, infrastructure connectivity will play a larger role in the occupiers’ location decisions. That leads to an increasing number of industrial parks nationwide with occupancy rates of between 70% and 90%.

In a recent CBRE survey, the number of factories in Vietnam named in Apple’s supplier list increased from 16 in 2015 to 22 in 2018, all of which are foreign invested enterprises.

In a similar move, 29 Vietnamese companies are now Samsung’s tier-1 supplier. This number is poised to increase after Samsung Electronics Co., Ltd announced in 2018 it would cease operations of mobile phone production plant in China. As a result, Samsung’s localization rate has increased considerably.

In addition, the thriving of new industrial parks, manufacturing facilities, and infrastructure shows that Vietnam will enter the next decade in a prime position and further establish itself as one of the major beneficiaries of a rebalancing China and evolving global supply chain.

The last but not least, low production cost has listed one of Vietnam’s advantages.

Production cost remains one of the competitive edges that Vietnam has in comparison with its giant neighboring China. Indeed, industrial land costs in major cities across China reach around US$180 per square meter (sq.m) while the rates in Vietnam are between US$100 and US$140/sq.m. This is clearly attractive for prospective manufacturers.

Meanwhile, the average land rental in Vietnam is increasing 5% to 8% annually, reflecting modest rise in rental at industrial parks, especially those connected to strategic locations and in close proximity to key infrastructure. Hanoitimes