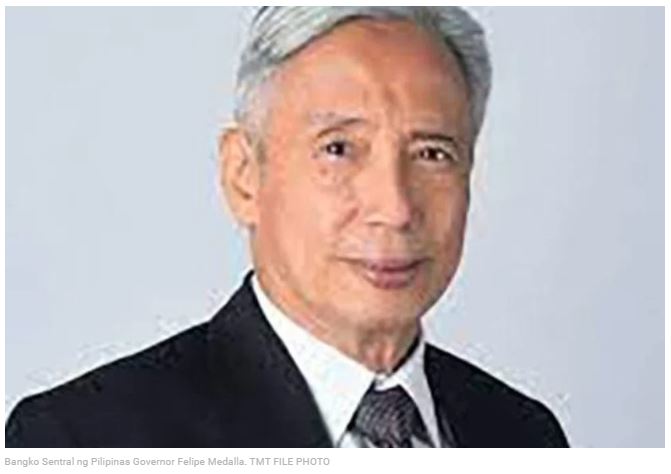 DESPITE the effect of rising fuel costs on consumer demand, the new chief of the central bank is optimistic that the Philippine gross domestic product (GDP) growth would reach at least the lower end of the government’s objective this year.

“It will be difficult to match 8.3 percent [economic growth] in the first quarter because of higher base effects. But at the same time, I will not be surprised if GDP growth this year is 7 percent,” Bangko Sentral ng Pilipinas Governor Felipe Medalla said in an interview with reporters on Wednesday night.

It should be mentioned that the government’s growth target for this year was reduced by the Development Budget Coordination Committee from the prior objective of 7 to 9 percent to 7 to 8 percent.

Medalla said the second quarter will still see positive GDP growth albeit slower than the prior three months, as people’s mobility continues to improve despite the rising Covid-19 cases.

“When you look at the malls for instance. People are actually almost unafraid of Covid. I am not a medical expert, but I think to the extent that the rise in cases does not result in clogging the hospitals, then we’ll be fine,” he emphasized.

Medalla also cited the central bank as an illustration, where Covid-19 cases have increased, but no hospitalizations have been noted.

“But, of course, it’s too small a sample…,” he continued, “but if what we’re seeing is what is everywhere, then the strong demand will continue, and we’ll have a very good 2022.”

The head of Bangko Sentral also downplayed the effect of rising fuel prices on economic growth, claiming that they are more likely to drive up prices than to reduce output.

“For instance, you will still commute to work right? But you don’t go out at night. So, in other words, it’s not hurting production as much as it’s hurting pockets.”

He said the other way it could reduce demand is if households pay more on fuel while potentially spending less on other things.

Relatedly, Sun Life Investment Management and Trust Corp. (SLIMTC) increased its forecast for the Philippines economic expansion this year as it anticipates improved mobility as a significant growth driver.

“Our forecasted GDP growth, in fact, is higher than other Asian and developed markets. And for this year, we’re looking at about 8.2 percent on average for the entire year,” said Mike Enriquez, president and chief investment officer of SLIMTC, at a briefing on Thursday.

He asserted that the economy will continue to expand despite challenges from oil and inflation if mobility limitations continue to get better and Covid-19 cases do not truly accelerate dramatically.

Enriquez added that although SLIMTC is optimistic about the Philippine economy, it is nonetheless cautious about some downside risks.

These risks, he said, include lingering tensions between Russia and Ukraine, which might keep commodity prices high for a longer period of time and result in supply shortages.

The head of SLIMTC also issued warnings about monetary policy, which may be perceived as “behind the curve” and result in negative currency carry; peso depreciation, which may cause foreign outflows; and a new severe Covid-19 variant, which may result in tighter mobility limitations.