The core inflation, which excludes administered and volatile price items, reached a new peak in October at 4.1% year-on-year (y-o-y), even though the country’s headline inflation has been moderating to 4% in the same month.

In August and September, the core inflation inflation rates were 3.8% and 4% respectively.

Against such a backdrop, economists anticipate Bank Negara to further tighten its monetary policy, potentially through two more rounds of overnight policy rate (OPR) hike in the first quarter of 2023.

Hong Leong Investment Bank Research said that the rising core inflation signals the build-up of underlying inflationary pressure due mainly to the recovery in domestic demand and labour market.

“In view of the rising core inflation and continued expansion, we maintain our expectation for Bank Negara to raise the OPR by another 25 basis points (bps) in January and March next year, bringing the OPR to 3.25%,” it said in a note yesterday.

In October, core inflation was driven by higher food and non-alcoholic beverages, transportation as well as recreation services and culture, alongside steady growth in housing, utilities and other fuels.

It is, however, noteworthy that Malaysia’s headline inflation has slowed down in recent months as the low base effect wears off, together with the decrease in commodity prices.

The producer price index decreased from a high of 11.6% in March 2022 to 4.9% in September 2022, dragged by falling costs in agriculture and mining production. 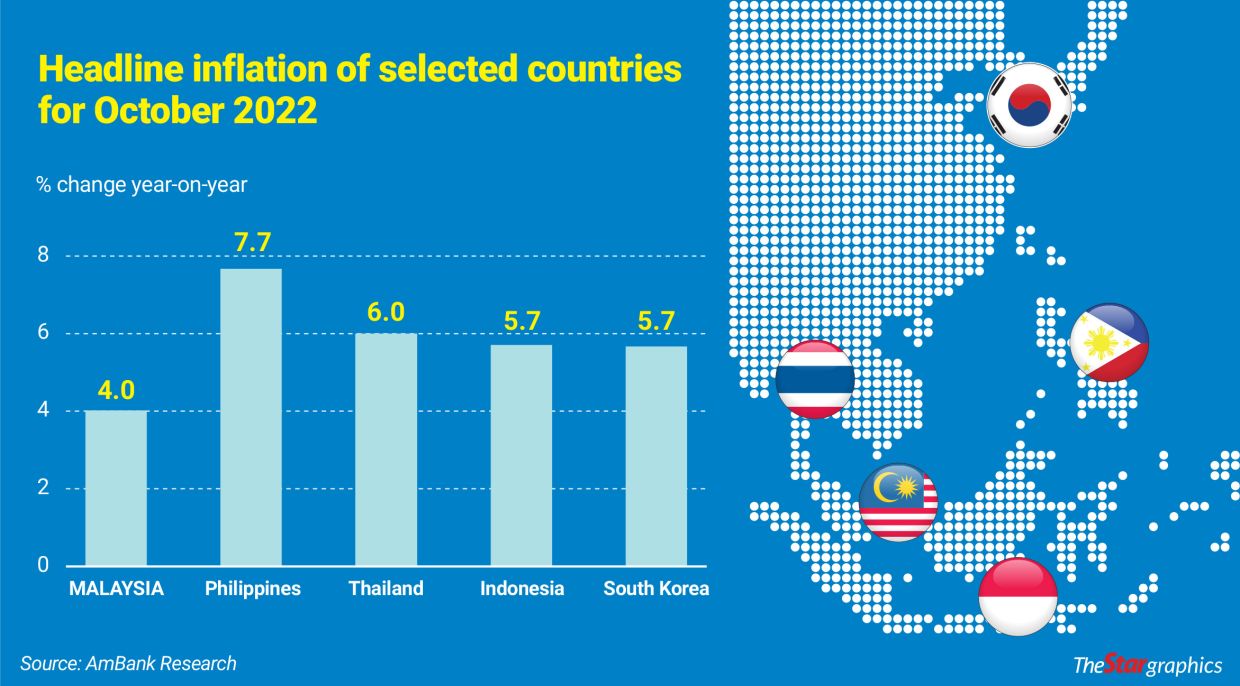 “In the recent November monetary policy meeting, Bank Negara highlighted that it expects headline inflation to remain elevated in 2023 amid demand and cost pressure with risk ‘tilted to the upside’.

“However, with the recent appointment of a new government, we anticipate inflation containment efforts to continue in line with the pledge given to prioritise in addressing the rising cost of living.

TA Research also predicted that Malaysia’s headline inflation would stay high at 3% y-o-y in 2023, following a rate of 3.1% this year.

However, the headline inflation for 2023 is still subject to policy changes in domestic subsidies and global commodity prices next year, it said.

“Nonetheless, domestic demand will remain the key driver for growth next year, supported by the continued recovery in the labour market and improvement in local currency,” stated the research house.

TA Research also added that the improvement of the ringgit at the end of November might have an impact on Malaysia’s inflationary pressure through moderate food import inflation.

The ringgit rebounded to trade below RM4.60 per US dollar since Nov 13, thanks to improving sentiment resulting from the possible less aggressive approach by the Federal Reserve in the upcoming December meeting.

In addition, the ringgit continues to improve with the appointment of new Prime Minister, Datuk Seri Anwar Ibrahim.

“We also believe that the slight downward trend in global commodity prices and a slowing of regional food inflation may lessen Malaysia’s inflation pressure.

“This is partly due to the Keluarga Malaysia government that has provided the biggest subsidy ever recorded in the history of the country,” it said.

However, the research house cautioned that the underlying retail prices are “unlikely to come down”, even if the headline inflation eases.

AmBank Research urged the government to look at the structural issues that are leading towards the rising living costs which is hurting the pockets of the people.

“In doing so, we need to address the cost-push inflation driven by issues like labour and talent shortages, rent seeking, supply chain and other cost related issues.

“At the same time, we need to create more value-add jobs for the rakyat.

“This would help create and ensure sustainability of the people’s livelihood rather than merely focusing on assistance which is only temporary to them and a burden to the country’s balance sheet,” it said.