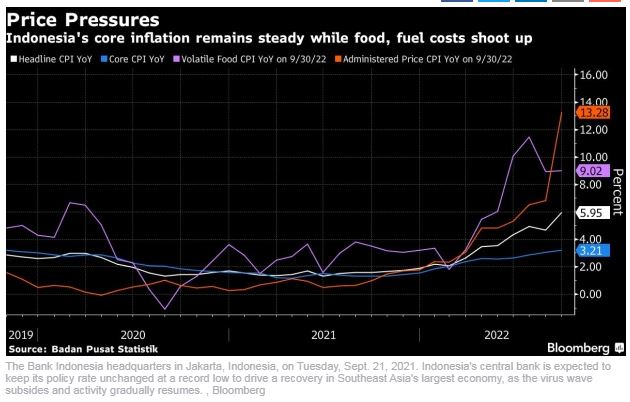 (Bloomberg) — Indonesia’s central bank could settle for quarter-point moves at its upcoming policy rate meetings after September inflation came in lower than estimates despite the fuel price hike, economists said.

The impact of higher gasoline prices is more subdued than expected, while food costs have likely peaked with the onset of the harvest season, according to Maybank Investment Banking Group economist Lee Ju Ye. The bank trimmed its forecast for Indonesia’s 2022 average inflation to 4.5% from 5.2%.

To be sure, the increase in transport fares and the rebound in consumer demand should keep price gains elevated in the coming months, before peaking at 6.5% in early 2023, Citigroup Inc. economist Helmi Arman said. He expects Bank Indonesia to raise the key rate by 25 basis points at each of its October and November meetings.

“While we do not think that it will move by similarly big increments in the coming meetings – especially if the currency volatility stays relatively contained – we do think that more tightening is to come,” said Oversea-Chinese Banking Corp.’s Wellian Wiranto, who also sees quarter-point hikes through January.

Here’s a round-up of economists’ views: