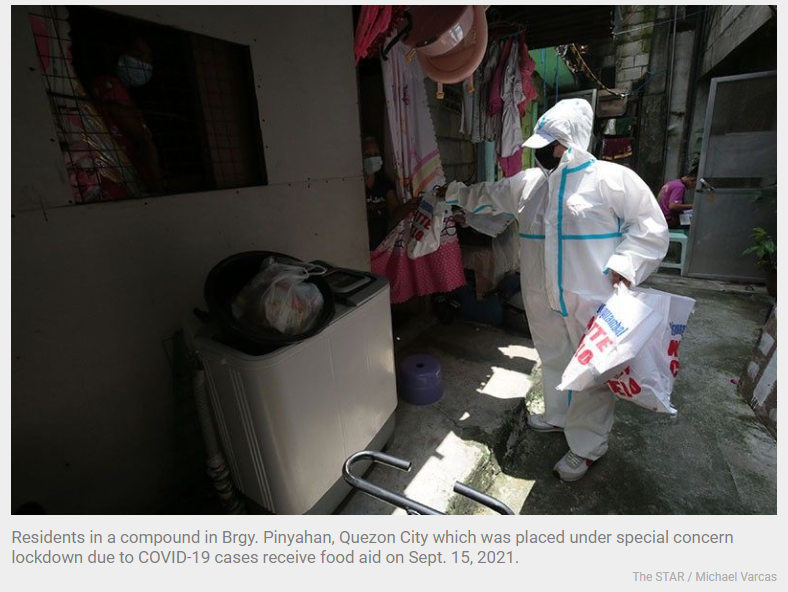 MANILA, Philippines – The Asian Development Bank maintained its economic outlook on the Philippines despite the recent tightening of pandemic lockdowns, saying the economy is healing but recovery remains delicate.

In an update of its flagship “Asian Development Outlook (ADO)” report released Wednesday, the Manila-based lender said the economy will likely grow 4.5% this year, unchanged from its projection in April.

A bounce-back of 5.5% for next year was likewise retained. At the same time, the ADB’s inflation forecast for this year was steady at 4.1% — slightly above the state’s 2-4% annual target — and at 3.5% for next year.

ADB’s outlook was within the expectations of the government, which recently downgraded its own forecast for this year to 4-5%, from 6-7% previously, after the emergence of super-contagious Delta variant set off harsh lockdowns in Metro Manila and nearby provinces for the second time this year.

In August, the capital region briefly returned to enhanced community quarantine (ECQ) — the strictest lockdown there is — following another surge in cases. Curbs have been eased since then and while the economy is already showing signs of recovery, ADB said new coronavirus variants that may trigger tighter mobility restrictions are the biggest threat to the economy’s “fragile” rebound.

“The economy has regained its footing and is on the right growth path. But the recovery remains fragile due to the threat posed by more infectious COVID-19 variants,” ADB Philippines Country Director Kelly Bird said in a statement.

According to Bird, vaccination “remains key to the economy’s safe reopening”. As of September 21, data from the health department showed 19.02 million people have been fully vaccinated against COVID-19, or about 17.4% of the country’s population.

The government was originally hoping to fully-vaccinate 70% of the country’s 109 million population, but the emergence of the Delta variant prompted the state to increase the target vaccination coverage to 90% which, policymakers said, would only be attained in 2022, at the earliest, amid tight supply.

As it stands, vaccination rates have been uneven across Asia where less than a third of the population was fully protected against Covid-19 at the end of August, ADB said. That compared with more than 50% coverage in the United States and nearly 60% in the European Union.

“Growth tended to be stronger in economies that had progressed the most in controlling the pandemic,” the Bank said.

In Southeast Asia, ADB forecast Singapore, which has a high vaccination rate, to clock in the fastest growth in the region this year at 6.5%, up from the earlier projection of 6%. Malaysia, meanwhile, is poised to expand 4.7% in 2021, faster than ADB’s forecast for the Philippines. Myanmar is the only country in Southeast Asia that is expected to contract this year at 18.4% amid a political unrest there.

On average, Southeast Asia is seen growing 3.1% this year, lower than ADB’s previous forecast of 4.4%. The broader Developing Asia is expected to grow 7.1% — compared with its previous prediction in April of 7.3% and a slight contraction in 2020.

The ADB warned that delayed vaccine rollouts and the emergence of new variants were among the biggest risks to the outlook — and could have long-term damaging consequences. “Income losses caused by the pandemic in particular threaten to leave lasting scars and have a multidimensional effect on regional economies,” the ADB said.

Progress on reducing poverty in Developing Asia had been set back “at least two years”, and prolonged school closures would lead to higher-than-expected learning and earning losses. — with AFP