MANILA, Philippines — Economic output likely contracted by as much as 20 percent in the second quarter, making the Philippines one of the worst-performing economies in Asia, said London-based think tank Capital Economics. The firm said the country’s performance during the quarter will be similar to that of Thailand, which saw a severe decline in […] 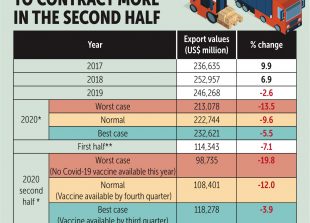 The deadline of the “We Travel Together” campaign may be extended to increase tourism momentum for the rest of the year, while travel bubbles for tourists will take place in October, says the Tourism and Sports Ministry. Phiphat Ratchakitprakarn, the tourism and sports minister, said the slow redemption of the domestic stimulus scheme launched on […] SINGAPORE – Bank lending in Singapore shrank 0.7 per cent in June from a month ago as loans to businesses continued to decline, though there were signs of pick up in consumer lending with the lifting of circuit breaker measures. Loans through the domestic banking unit – which captures lending in all currencies, but reflects […] The Hanoitimes – By being ahead of the curve of the Covid-19 crisis, Vietnam has the unique opportunity to increase its footprint on the global economy, said a World Bank’s senior executive. Although Vietnam’s economy is set to grow  2.8% in 2020, the lowest growth rate over the past 35 years, it will ensure the position […] Uber will keep its Asian headquarters in Singapore for now, the ride-hailing giant said Thursday, blaming regulatory uncertainty for thwarting a mooted shift to Hong Kong. The decision came weeks after China imposed a controversial national security law on Hong Kong — although Uber did not mention the legislation in its announcement. The company announced […]