Indonesia: Poverty in Indonesia: 10.86% of Indonesians is Poor (March 2016) Mon, 18 July 2016 – According to the latest data from Statistics Indonesia (BPS) there were 28.01 million Indonesians living below the poverty line in March 2016, or 10.86 percent of the total Indonesian population. This is an improvement from September 2015 when Indonesia’s […]

Indonesia: Cement Sales Indonesia Rose 3% in First Half of 2016 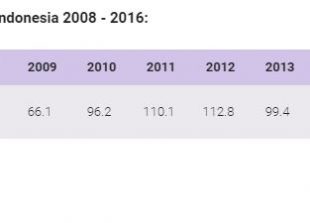 Indonesia: Indonesia Stock Market & Rupiah: Stocks Rally in Post-Brexit Reality Tue, 12 July 2016 – In the post-Brexit reality, stocks have been performing well, worldwide, with the exception of the week of 4 July when markets were hit by profit-taking amid heightened concern about the world’s economic fundamentals. Apart from that week (when Indonesian […]