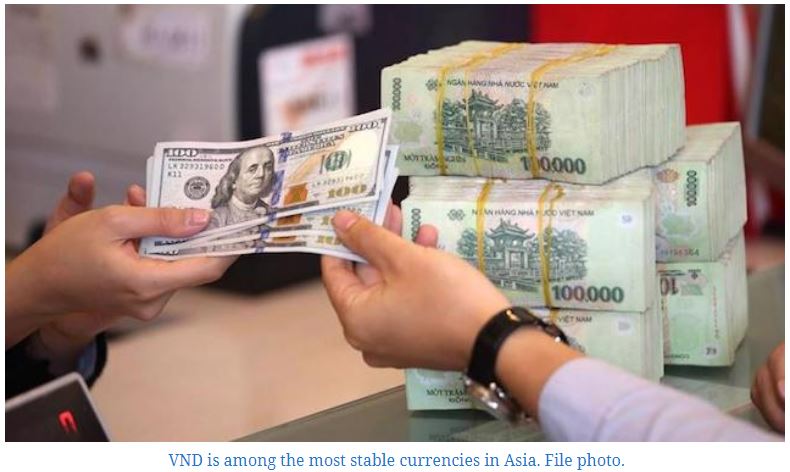 With the internal strength of the currency and the central bank’s flexible management, the VND is expected to depreciate by a maximum of 3% in 2022.

The Vietnamese Dong (VND) has devalued by 2.21% against the US dollar compared to late 2021, but remained the most stable currency in the region, according to the Bao Viet Securities Company (BVSC).

In the international market, the US dollar index (DXY), which measures the value of the US dollar against other currencies, rose by 0.76% in July and 10.7% since early 2022.

According to the BVSC, all currencies from emerging economies in Asia have depreciated against the USD, with Thailand’s Bath suffering the largest decline by 9.42% compared to the beginning of the year.

BVSC report noted following a policy meeting last month, the Federal Reserves (FED) decided to hike benchmark rates by 75 basis points for a second consecutive month. This prompted the USD to rise by 13%, the highest level in the past 20 years before cooling down in late July.

Meanwhile, the State Bank of Vietnam (SBV) increased the USD selling price from VND23,250 in early July to VND23,400, or a rise of VND150, as well as changed the transaction method from 3-month USD forward contracts to spot buying.

“With internal strength of the currency along with flexible management of the SBV, the VND would depreciate for a maximum of 3% in 2022,” noted the report.

Vietnam’s credit growth as of July 26 expanded by 9.42%, the highest seven-month growth in the past five years.

The SBV’s decision to keep selling foreign currency in the past months has also led to a 3-month high increase in inter-bank interest rates.

“High probability of FED’s future rate hikes may put pressure on rising inter-banking interest rates,” noted the BVSC, saying the rate may expand by 0.5 percentage points for this year.