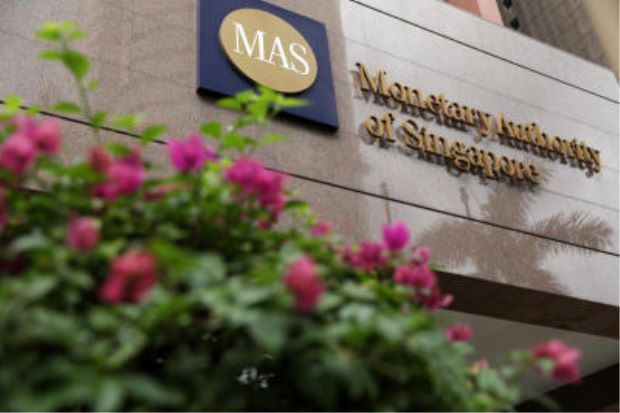 The Monetary Authority of Singapore, which uses the exchange rate as its main policy tool, raised the slope of its currency band slightly, according to a statement on its website Friday. That implies it will seek an appreciation in the currency. Just over half of the 21 economists surveyed by Bloomberg predicted the move, with the rest expecting no change.

The Singapore dollar gained 0.2 percent to 1.3742 against the U.S. currency on Friday morning.
Led by the U.S. Federal Reserve, global central banks are moving away from the ultra-easy policy of recent years, encouraged by solid growth and a slow pick-up in inflation. In trade-reliant Singapore, growth is seen moderating from last year’s 3.6 percent, yet still at a healthy pace of 2.5 percent to 3.5 percent.

A separate report on Friday showed gross domestic product grew an annualized 4.7 percent in the third quarter from the previous three months, compared with a median estimate of 5 percent in a Bloomberg survey. The economy expanded at a 2.6 percent year-on-year rate in the three months through September, beating the median projection for 2.4 percent.

While global economic risks have risen on the back of the U.S.-China trade conflict, there’s no reason to “overreact,” MAS Managing Director Ravi Menon said in an interview this week. The global economy has “underlying resilience,” he said.

The MAS repeated the word “resilient” in the statement to describe global growth in the face of trade tensions. In April, the central bankers flagged “significant consequences for global trade” if U.S.-China trade tensions were to escalate from that time. Since then, the two governments have engaged in three rounds of tit-for-tat tariffs.

“It’s a risk to the downside, certainly something they’ll continue to monitor,” said Khoon Goh, the head of research at Australia and New Zealand Banking Group Ltd. in Singapore, who correctly predicted the MAS would tighten policy. “But unless there’s more concrete evidence that activity is still coming off, they’ll continue to treat it as a risk rather than something to factor into the baseline or to factor into their policy decision.”

Singapore’s economic growth, meanwhile, was judged to be running “slightly above potential” and expected to expand at a “slower but steady pace” for the remainder of 2018 and into next year, according to the statement.

Economies across Asia have been tightening this year. After an early move by Malaysia, Indonesia and the Philippines have raised interest rates aggressively to curb currency weakness. India raised rates twice since June, but kept them unchanged last week.

“They see building domestic price pressures, which is a key reason” to tighten, Goh said of the MAS. They will continue to tighten next year if growth and inflation evolve as expected, he said. “This is definitely not the end of it.” – Bloomberg