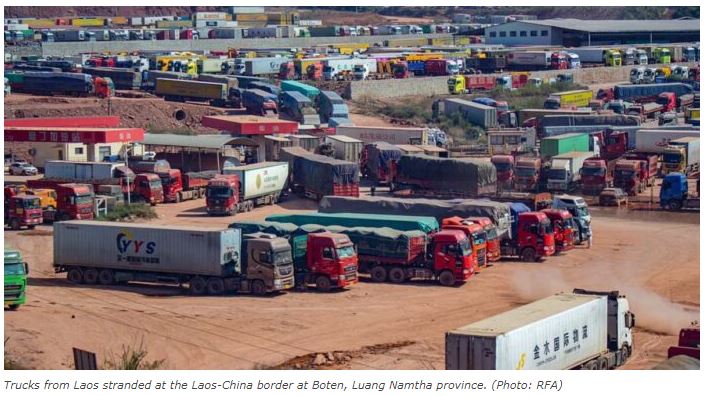 Strict Covid-19 controls by China have meant cargo trucks from Laos have been unable to deliver freight, leaving thousands of trucks stranded at the border gate in Boten.

The problem has been ongoing since the pandemic began, despite round after round of negotiations between Lao and Chinese authorities.

President Thongloun Sisoulith even flew to Luang Namtha in February to urge officials to work harder to clear the congested border.

But the line of stranded freight trucks in Luang Namtha still stretches some 20 kilometers from the border with China.

Vientiane Times reports that the Ministry of Industry and Commerce held an emergency meeting on 23 August to discuss the problem, drafting measures to assist the transport sector.

Chaired by Manivone Vongxay, Deputy Director General of the Ministry and Commerce Department of Import and Export, the meeting discussed measures that could be implemented domestically to try to alleviate congestion in Boten.

At the meeting, officials acknowledged that strict Covid-19 controls by China have left several border checkpoints between the two neighboring countries closed, with only the Boten border open for trade. This has meant that trucks must amass at a single point before delivering goods across the border, leading to uncontrolled congestion.

To manage the problem, the meeting agreed to appoint a special taskforce to implement solutions.

The Luang Namtha provincial administration has been tasked with coordinating with neighboring provinces to try to better facilitate trucking routes, while the Laos-China Cooperation Committee, under the Ministry of Foreign Affairs, will be tasked with continuing negotiations with China and lobbying for the opening of more borders, as well as increasing the quota for the number of trucks that may enter China each day.

At the same time, authorities will begin to prioritize goods, with perishable products to be allowed to cross the border first to prevent spoilage.

The Ministry of Public Works and Transport has been tasked with repairing roads from Oudomxay and Bokeo to Luang Namtha, which are in poor condition, as well as researching the feasibility of trucking goods to freight stations domestically and making deliveries to China via the Laos-China Railway.

The Laos-China Railway has also been asked to coordinate with China’s central government to urgently set up an agricultural inspection zone at China’s Mohan Station as soon as possible.

The railway company has also been asked to expand the freight area at Oudomxay Station, increase the number of containers in operation, and improve transparency regarding regulations and procedures for freight delivery via the railway.