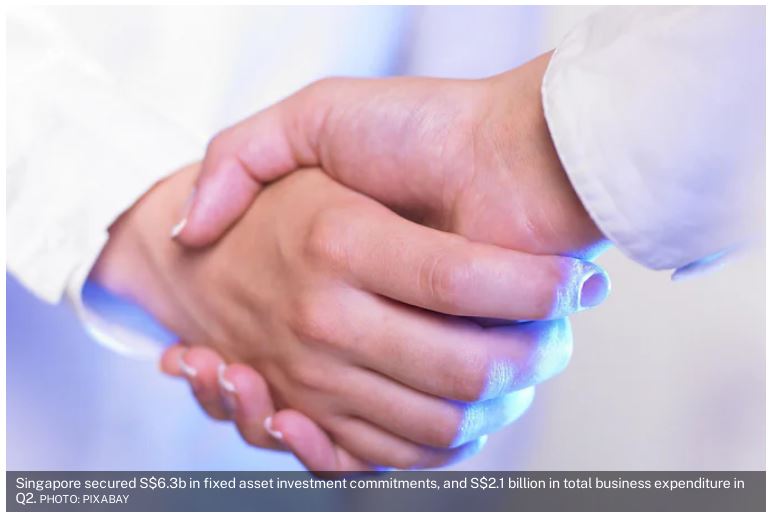 INVESTMENT commitments secured for Singapore in the second quarter of 2022 amounted to S$6.3 billion in fixed asset investment (FAI) and S$2.1 billion in total business expenditure (TBE), according to the latest Economic Survey of Singapore released on Thursday (Aug 11) morning.

The figures refer to investment commitments garnered by the Singapore Economic Development Board. When these projects are fully implemented, they are expected to generate S$6.1 billion of value-added and create more than 5,100 jobs in the coming years.

Services accounted for 43.3 per cent of FAI, of which infocommunications and media attracted the most investments, at S$1.8 billion.

Investors from Europe contributed the most to total FAI at S$3.4 billion, or 54.5 per cent.

In terms of TBE, services attracted the highest amount of commitments at S$1.9 billion. Of this, infocommunications and media attracted the largest share with S$1.2 billion, followed by headquarters and professional services with S$437 million.

Within manufacturing, the electronics and biomedical clusters attracted the largest amount of TBE commitments, at S$137 million and S$38.1 million respectively.

Investors from the “others” region contributed the most to TBE, with commitments of S$1.4 billion, or 66 per cent of the total. This refers to regions other than the United States, Europe, Singapore, Japan, China, and India.