The International Labour Organization (ILO) estimates that as many as 93% of those who are employed in Cambodia are part of the informal economy, while the share in Myanmar and Indonesia, two other Southeast Asian countries, is as high as 85%.

According to a recent report by the Asian Development Bank (ADB), other estimates point to shares in excess of 55% in Thailand and 56% in the Philippines (the average annual rate over 2008–2017).

The vast majority of these workers in the informal sector are either self-employed or employed in SMEs, which represent the backbone of the economies of the five focus countries in the report – Cambodia, Thailand, the Philippines, Myanmar and Indonesia.

Most of them are employed in the agriculture sector, with the ratio of informal workers in rural areas exceeding 95% in Cambodia. This is a challenge, as high shares of agriculture in GDP are generally associated with lower tax-to-GDP ratios, as most people employed in the sector are on low incomes and are not registered for tax purposes.

The report also said that Cambodia’s tax revenue in the first three quarters of 2021 was three percent lower than the level achieved in the same period in 2020.

The growth forecast was also revised down to around two percent in 2021 as the prolonged outbreak of COVID-19 was expected to disturb the country’s recovery in industry and services sectors.

Although overall tax revenue surpassed expectations for 2020 according to Cambodia’s General Department of Taxation, forecasts for the 2021 Budget have been downgraded to below 2020 levels to account for the impact of the pandemic and associated economic slowdown.

With the success of the coronavirus disease (COVID-19) vaccine rollout in 2021 in Southeast Asia, governments in the region are starting to shift their focus from immediate response toward recovery.

As of December 2021, close to a total of $914 billion worth of COVID-19 response measures had been announced by Southeast Asian economies, with Cambodia, Indonesia, Myanmar, the Philippines, and Thailand combined committing more than $527 billion. Unparalleled fiscal expenditure has been coupled by a substantial reduction in the tax base, partly because of subdued economic growth and partly because of underlying public finance management issues, which have been exacerbated by the pandemic.

Optimal domestic resource mobilization (particularly tax collection and administration) will be a core enabler in the transition from emergency to recovery, as countries will need to balance fiscal sustainability concerns with the need to invest to support economic growth. The ADB report shows that governments in the region can take immediate action to su 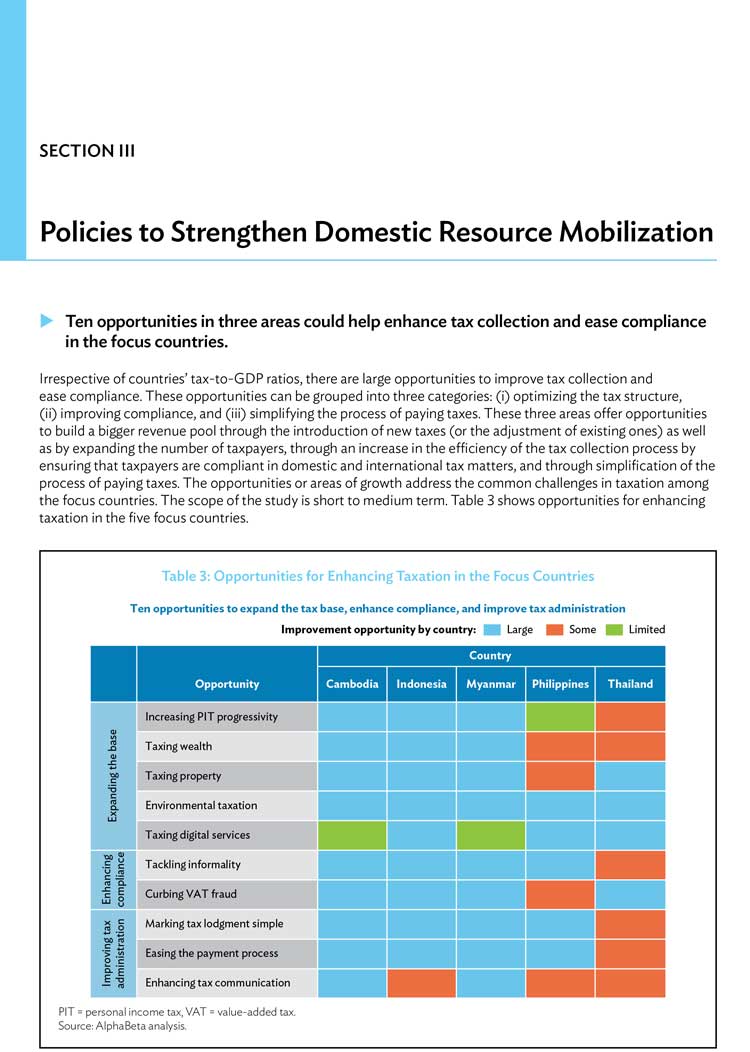 Even before the COVID-19 pandemic, many Southeast Asian countries faced taxation challenges. A country’s tax capacity, its ability to extract revenues to provide public goods, depends on several economic and demographic factors (including population size, resource endowment, industry sector composition, level of corruption, size of the informal economy, and quality of the bureaucracy). Tax structures (i.e., the mix of taxes used to generate revenue) are built on comparable pillars but their mix varies across countries. As a result, tax-to-GDP ratios differ substantially worldwide.

Southeast Asian countries are no different, with variation across revenue size, sources, impact of nonrevenue taxes (e.g., commodity sales and investment income), levels of decentralization in collection and administration, and overall institutional capacity of tax administrations. Nonetheless, global benchmarks point to a significant opportunity for many countries in the region to improve tax collection. Tax-to-GDP ratios average 13.7% in the focus countries, but with substantial variations in performance.

A closer look at the five focus countries reveals some encouraging reforms. There has been mixed progress in the countries’ ability to raise their tax-to-GDP ratios over the past five years, with steady rates in Indonesia and Myanmar, improvements in Cambodia and the Philippines, and a slight decline in Thailand.

While trends in tax-to-GDP ratios are susceptible to the impact of changes in economic growth, an assessment of existing challenges points to several commonalities as well as substantial opportunities through effective tax reform. Several initiatives are ongoing or have been completed, including Cambodia’s Revenue Mobilization Strategy 2019–2023 (launched in 2019), focusing on automation of tax services, review of tax incentives, and the establishment of key performance indicators.

These initiatives highlight different levels of maturity in the tax reform process of the five countries but also point to common challenges that policy makers are considering, as well as emerging issues. These challenges often cut across tax base maximization (and optimization), compliance, and operational efficiency.

Critically, COVID-19 has magnified these gaps in several ways. For example, declines in tax compliance reflect taxpayers’ reaction to economic hardship but also point to operational challenges in tax filings, made difficult by lockdowns. Another example is the increase in the use of digital platforms for business transactions, which has created additional compliance gaps particularly among micro, small, and medium-sized enterprises (MSMEs).

Tax registration of MSMEs is generally low in the focus countries and while there is an opportunity to tax transactions through digital platforms, this often does not happen.